This short story takes place midway through V2, after they find the Wizard of Oz set piece and before they go play frisbee golf. Around the two mini comics. After page 118 for the archivists! This was the first short story that I posted on Patreon, and since ARH is ending I thought i would make it public as a gift to everyone. Thank you so much for reading ARH.

If you want to see more ARH short story updates or updates on our future projects, follow us on twitter: @always_raining_ or tumblr: hazeldrop.tumblr.com 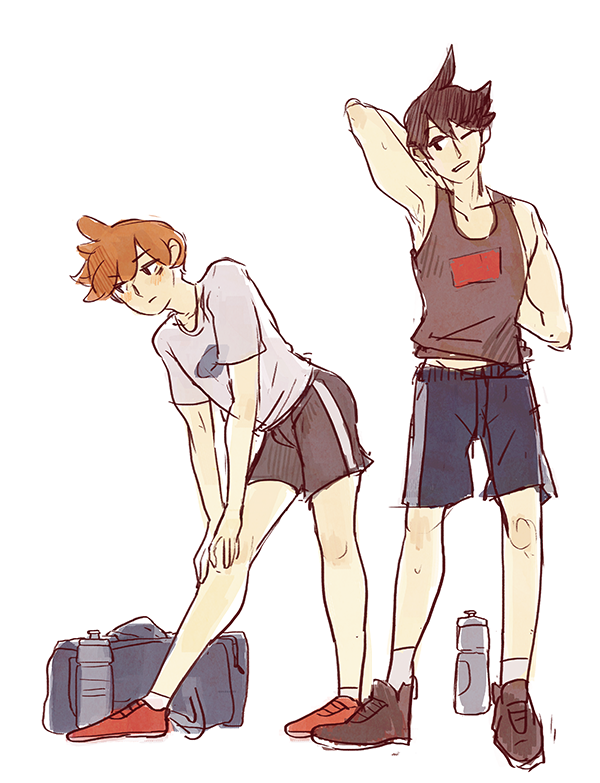 Adrian didn’t know what was happening when he felt a pressure against his head, poking through his hair, prodding against his skull. He wasn’t sleeping, or at least he didn’t think he was sleeping. He had already finished his work, and he was just resting his eyes. It had only been a minute anyways, he didn’t know what the fuss was about-

“Class is over, buddy,” Maria’s voice blared into his head. “Time to go.”

No way. Adrian whipped his head up, suddenly completely awake (not that he had been sleeping in the first place). Maria was standing next to his desk, staring down at him with her bookbag hoisted around her shoulder. The classroom was emptying out rapidly behind her.

He glanced at the time. Wow.

“I see,” Adrian said, blinking hard. “Should we go then?”

Maria didn’t say anything. She looked like she was torn on whether the situation was sad or hilarious.

“Netflix is not a substitute for sleep, Adrian,” she said, flicking his forehead. “Get yourself together.”

Adrian rubbed his forehead, frowning. “As if.”

“You need sleep more than you need practicing your lines for the play.”

She rolled her eyes, flattening her mouth into a thin line. “Sleep is better than sexting boys until 3AM.”

Adrian suddenly realized how rock solid his expression had become. His muscles were set in cement. Vulcanesque. The poker face of champions.

“I was not,” Adrian choked out, completely convincingly.

“That was like…two days ago.  And he just sent me this stupid video.”

Stupid was one way to describe it.  It was an innocent midnight text session that had ended in Carter sending him a surreal video of morphing blobs of sheep accompanied by unsettling carnival music. That night he just kept seeing the sheep every time he tried to close his eyes. Wiggling their multiple heads, running along with their spider legs, transforming into unspeakable beings and wheeling away with a circle of interlocked flesh toned tails…

“I’m fine, I just needed a nap,” Adrian said, his poker face cracking into the most convincing smile he could manage. “I’ll be fine for the rest of the day.”

Maria looked just about as unconvinced as he felt.

Falling asleep in the middle of math class was starting an unfortunate trend.

Adrian nodded off in Biology, too. His notes had begun in legible print and ended in an incomprehensible trail that crossed right through his cell diagrams and made their way out of the margins and onto the desk. He spent the better part of the allotted travel time between classes scrubbing his desk with eraser to remove the pen marks.

Things weren’t looking good for the second half of the day either. There was no French class, being replaced instead by the mandatory school spirit assembly. It consisted of a performance by the school sports teams that nobody came out to cheer on, a song or two by the jazz band and choir, and an appearance by their mascot, the centaur.

(The costume was two seniors playing the torso and legs respectively, one with a naked chest painted with the school logo, the other draped in a fuzzy brown welcome mat. It was hard to forget).

At least Adrian assumed this was what happened in the assembly. He had pretty much blacked out as soon as he sat down.

“So you were sleeping during the assembly?”

Adrian glanced up. Carter was doing a stretch that looked mostly incorrect, swinging his arms around like helicopter blades.

“Nothing,” Adrian said, turning his head away, fighting to keep his face under control.

Carter wasn’t giving up that easily, though. He was probably excited to see Adrian behaving badly, like he was fallible or something. Adrian didn’t really know why it was a big deal, he hated school just as much as anyone else. He just made an effort to stay on top of of things.

And yes, sometimes that effort meant he had to stay up until 5 AM to study for a quiz in a week, but sometimes sacrifices had to be made.

“So did you fall asleep?” Carter asked, waggling his eyebrows.

“No. Maybe.” Adrian changed his stretch, folding an arm up around his back, shirt riding up his stomach.  “What would you know about it anyways?”

He didn’t miss the way that Carter seemed to quiet down for just a second, the way that his eyes slid downwards like he was in a trance. Adrian was quite aware of where he was looking.

He didn’t move his stretch.

“Were you watching me sleep, Carter?” Adrian asked.

“Uh.” Carter said, and with what looked like a monumental effort, dragged his eyes up. “…What?”

Adrian felt a smile tug at the corner of his mouth. “Sounds like you were.”

“Oh?” Adrian said, pulling his arm across his chest, flexing his fingers. He could feel the burn of the muscle, he probably was going to pay for this later. “You tell me, you seemed to be paying more attention than I was.”

It entertained Adrian greatly, watching Carter sweat. After all those weeks of spouting off lame innuendo like a fire hydrant, he really had no idea how to handle it when it was shot back at him.

Carter looked like he was going say something, maybe attempt to dig out of the grave that he had cemented himself into, when the PE Coach suddenly interrupted.

With that, the tension completely evaporated. Carter whipped his head around, his eyes bright. “It’s my turn already?”

It was wrestling week in PE, which meant that they were in the mat room, taking turns using the ring to spar.  Adrian watched Carter head off to the ring like he was excited to go or something, jogging in place, shaking out his wrists. All evidence of their conversation had completely released from him, the tension gone.

It made Adrian want to roll his eyes. It was hard to get anything to stick to that guy, honestly.

He sat down on the floor to watch with the rest of the students scattered around the ring, waiting for their turn. He propped his chin up on his palm, his eyes lazily following Carter’s fumbling little moves, the way he scratched himself sheepishly on the back of the head, the way he stretched himself out, the way his neck bent when he nodded to the teacher while hearing the rules.

Adrian yawned behind his hand. Even now, two naps into the day and his eyes still felt sore. Sitting down like this was going to make him nod off again, for sure.

At least there was a mat to sleep against, that was better than a floor.

The whistle sounded, the PE coach shouted, and they were off.

Carter seemed to be going along with the narrative anyways. He was smacking his hands together like an athletic junkie, like he was confident in his actions and not just bluffing, mirroring Track Team’s movements as they circled around the mat.

Adrian didn’t actually get to see Carter’s face until they had done a full half circle of the ring. His mouth was split open into a grin, arms out wide. Like he was having fun or something.

“Come on Evans, you can’t run forever,” he taunted.

Track Team (Evans? First name or last name?) wasn’t taking that lying down. “Hey, from here it looks like you’re running from me,” he taunted right back.

They circled again, watching each other. Adrian yawned again. They were so serious.

But just as he felt his eyes droop, Carter moved. He broke from the path and dived, grabbing his opponent by the waist and slamming him down on the mat. They landed with a smack that echoed in the gym.

That got everyone’s attention. The bored atmosphere in the gym suddenly electrified with raucous cheers. The gym teacher was on his feet, yelling something above the rowdy crowd of boys. Adrian had to give it to him, they hadn’t seen a takedown like that since the unit started.

He had no idea how Carter was still bluffing his way through this too. Or maybe he actually paid attention in PE. Adrian wasn’t about to give him that much credit though.

Carter and Track Team were struggling on the mat now, pushing each other around, grappling tightly, gasping and wrapping their arms around each other. It was a sort of a stalemate, punctured by quick movements and heavy grunts.  Carter was on top, his back arched high, muscles flexing through the fabric of his shirt as he struggled to keep his opponent pinned. Beads of sweat were forming on the back of his neck, his toes prying at the mat, levering himself down.

Adrian felt very aware of how loud the class was around him as he watched.

Then it was over. Their coach yelled something out, Adrian didn’t even know what it was, and Carter and his opponent had fell out. Carter flopped onto his back, red faced and sweaty, and let out a bit of a whoop. He bounced back up to his feet, pushing his sweaty hair out of his face, pulling at the collar of his shirt so it unstuck from the perspiration on his chest. Then he was out of the ring, facing Adrian.

Adrian didn’t realize he was speaking to him until it was too late.

He snapped to attention. “Sorry, what?”

Carter didn’t even miss a beat. He just cracked a smile so disarming, so unaware and so natural and so effortless that it just radiated off his sweaty red face like a sunbeam that broke through Adrian’s skin and warmed him right to his gut.

“Sorry,” Carter panted. “I just asked if you slept through the match.”

Adrian stared at him blankly. Did he sleep through the match.

Carter laughed, shaking his head. “Yeah,” he said proudly. “It was awesome.”

Adrian didn’t even try to maintain the conversation. He felt like if he spoke anymore, all scotch-taped efforts to keep his facade intact would just end up wisping off into smoke. He was awake, depressingly awake, so awake that he didn’t think he would need to sleep tonight. Or maybe for a week. It was so obvious. It would be so obvious to anyone who just looked at him to see that he was pretty much shocked back into existence, dragged back into the land of the living. He was more than uncomfortably warm.

Carter just went back to the mats. He didn’t seem to notice.

This guy was going to be the end of him.