Hi everyone! Here is our small gift to you for sticking around with us through this last year! 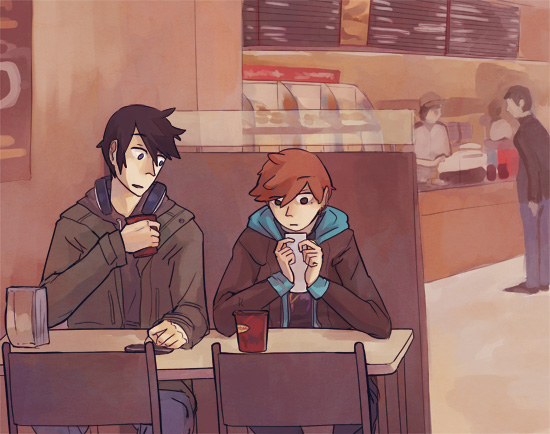 They ended up taking refuge in the 24 hour Tim Hortons beside the mall after Adrian had paid for his early bird copy of Mass Effect 3.The lineup in Tim Hortons was mercifully short, at least in comparison to the monstrosity of a lineup standing outside in the wind and the rain that they just waited an hour in.

It wasn’t really Carter’s idea of the Ideal Date, but Adrian seemed excited. Actually he seemed like he was in shock, but Carter was attributing that as excitement anyways. He had to be excited, considering he had insisted they go buy this thing at its midnight release rather than waiting until tomorrow afternoon. Like normal people.

“But Caaarteeer” Adrian had said. “You need to go to a midnight release at least once in your life. Didn’t you go when Pokemon black and white came out?”

He hadn’t even felt tempted to.

“What’s the point of waiting for three hours in line to buy a game when you can just buy it in, you know, the morning?” Carter muttered “Like a sane person would. Just lounge around at home for a few hours and sleep, and then you don’t have any lineups or waiting out in the rain-”

“I’ll have a coffee, medium, black please.” Adrian said, cutting off the conversation to speak to the bored-looking cashier. He glanced back to Carter, “What do you want?”

Carter had to think about that, his eyes lingering for a moment on some frothy cappuccino concoction with a mountain of whipped cream and sprinkles that was floating around on the Tim Horton’s television screens beside the menu.

“Uh same.”
They took their coffee back to the table they had dropped their wet coats on. It was right beside a window that looked out onto the grey rainy mall parking lot, out to the endless line of people waiting to pay before the release happened at midnight. Adrian cradled his coffee in his hands, looking out in the dark and rain with a far off glimmer in his eyes that Carter could only describe as being the glance of wistful longing.

Carter took the opportunity to dump two sugar packs into his coffee, tossing them over his shoulder just before Adrian turned to look back around.

“Hey, can you pass me my coat?” Adrian asked as Carter nonchalantly stirred his coffee for no apparent reason whatsoever. “I just need to check in my wallet…”

Carter tossed him the coat, and Adrian immediately scrambled into the pockets and pulled out the receipt for the game that they had just got. At midnight he could go pick it up, and in the meantime the only way of validating that he had a copy was that little slip of paper.

Adrian stared at it like it was the key to his future.

After a minute of him staring at the receipt (or reading the fine print, whatever he was doing) Carter felt a bit of a smirk coming on his face. Adrian noticed immediately, and kicked his shin under the table.

“Don’t judge me.” he grumbled. “It’s not like you don’t have weird hobbies.”

“Not ones where I wait in lines in the rain with neckbeards past midnight, I don’t” he said, biting down his grin a bit. “You have been waiting a long time for this though, so I’ll give you a free pass.”

Adrian rolled his eyes. “Oh hold me Casanova, your tender understanding has put my heart to ease.”

Carter choked in his coffee.

Adrian gave the receipt one more cursory glance before carefully folding it up into thirds and slipping it into his jacket pocket. “I’ll make it up to you for all the driving and waiting and stuff.” he said, “Pancakes in the morning, how does that sound?”

Carter looked at him carefully over the top of his coffee.

“Well, that’s if you wanna stay over for the night.” Adrian said. He had a sly grin on, that bastard. A cheeky sly grin worn by every seductive Bond femme fatale ever.

Carter did want to stay over. A lot. And pancakes would undoubtedly be delicious. Except-

“You’re going to be playing your game the entire night aren’t you.”

Adrian gave him a weak smile.

“Pancakes!”
It was a convincing argument, he had to admit.