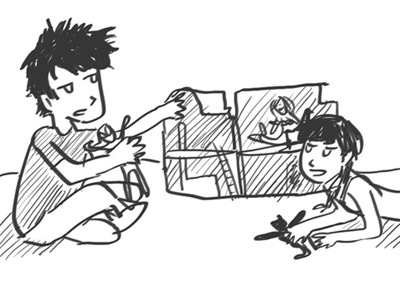 While Carter had told most people that he had only figured out he was gay last month, they often responded with some degree of skepticism. Really? They had asked, raising their eyebrows at him. You’re seventeen, it really took you that long to figure out?

It had actually. Carter had a couple sneaking suspicions here and there throughout his adolescence, but they had all snowballed into a conclusion only a month ago, which was a good three years after he had gone through puberty.

In comparison, his little sister had figured him out in 2002.

He had been eight years old, she was four, and at the time both of them were engaged in a very heated game of Spider-man verses Disney Princesses in the garage sale edition of Skeletor’s castle. Carter had been dead set on declaring his sister’s Little Mermaid doll as a Mary Jane replacement, since she was a redhead and Spider-Man needed someone to rescue besides Veterinarian Barbie’s pregnant cat.

“He’s gonna save Mary Jane from the clutches of your evil Princess Force Five” Carter had said, snatching Ariel from where she was propped up in the throne room of Castle Skeletor. “And she’s gonna say thank you so much for saving me Spider-Man! And then they will get married and live happily ever after.”

Four year old Rebecca didn’t like this idea so much. “Nooooooohhhhhh Carter” She whined, tugging Ariel back. “Fish Princess of the Ocean Legion doesn’t wanna marry Spider-Man. Besides, you’re gay. Spider-Man can marry Batman. They already have the same last name.”

Carter was eight, but like many eight year olds, had no idea what “gay” really meant. He had always assumed it was some kind of cuss word since teachers had scolded children from using the word like how they used “dumb” or “stupid”. So, curious and slightly confused, he had gone straight to the person who would know what it meant.

“Daaaaaddd” Carter called as he padded down the hall to the living room where his father was reading the Georgia Straight. “Dad, Rebecca called me gay. Am I gay?”

For some reason, his dad seemed to know instinctively that she hadn’t been referring to “happy gay”. Folding up the paper in a typical patriarchal fashion, he looked down at his son and said simply, “You’re too young to know that now. Give it a few years.”

Carter, like most kids, hated to be told he was too young. “No I’m not.” He said, puffing out his cheeks in indignation. “What does it mean?”

So his father had sat back and thought for a minute.

Carter thought about that. “But I like boys. I like girls too. Am I gay?”
His father at this time was realizing that the word “like” had much wider connotations than he had originally realized. “Like-like” he said. “Would you want to marry a boy, rather than marry a girl?”

Carter thought about that for a minute. He liked Spider-Man, idolized Spider-Man. And Spider-Man wanted to marry Mary Jane.

“Then you aren’t gay,” said his dad, turning back to the paper.

And that was that.

Nine years later, when he had come out to his sister she had simply rolled her eyes and muttered “finally” before resuming her texting session with her BFF.

When he had come out to his parents, his mother had interrupted with “CALLED IT” and promptly requested his father to hand over the cash that they had been betting on his sexuality.