This casually handsome devil is the star of this comic.

Carter, age 17, lives in a dreary lower mainland suburb with his sister, parents, and a cat. He is not one for tact, social common sense, and has what could be the world’s most pathetic seduction technique. He is often seen wearing headphones around his neck without actually listening to any music. Carter’s close friends are Jason and Mike, and he generally keeps a friendship circle of some of the less radiant members of the school,  slackers,  douchebags, potheads, and borderline dropouts. He is also an avid Nintendo fanboy, comic book geek and, when he does actually listen to music, listens to many types of rock.

Adrian doesn’t know what he did in a past life to deserve this.

Adrian is mild mannered and studious, a member of the school musical theatre club and fairly well liked among teachers and students. Adults would describe him as mature and reserved, while friends would describe him as a dry, smart-assed,  slightly neurotic unintentional hipster.  His best buddy is Maria, who is also his musical theatre partner in crime. Adrian is the runt of his family, which consists of four boys and two frazzled parents. His favors indy music from the Lower Mainland,  classic science fiction novels, and video games. Specifically, he plays a lot of fps and can occasionally be found at his television, yelling obscenities into his mic like a twelve year old. 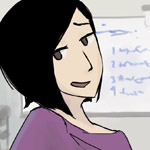 Maria is the long suffering best friend of Adrian, and often makes sure he feels her burning revenge for having to deal with his bullshit.

Bright and clever, Maria is a member of the musical theatre club, although she does prefer acting to singing. Meddlesome at heart, Maria does want the best for her friends, but can’t help on wanting to hear details and getting to the juicy meat of gossip. She’s also a huge film geek who holds monthly movie marathons in her basement with her friends, Adrian included, as she is determined to wean them off recycled garbage and expose them to the classics.

Jason is one of Carter’s closer friends, and has been throughout most of high school. He’s 16.5, and is too much like Carter to actually find any of his antics really surprising. A bit of a slacker/party animal, Jason is a serial womanizer, bad at school and does not live life seriously. He enjoys playing hockey and occasionally tries to rope Carter into playing scrimmages with his team.

Mike, age 19, is one of Carter’s childhood friends. They grew up in the same neighbourhood and spent summers at each other’s houses. Mike went to the same high school as Carter, but is a couple years older and has graduated. He’s a bit socially awkward and is having trouble finding a job, but he enjoys the company of people he knows well. 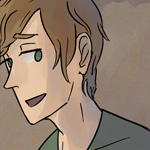 David is a mysterious gentleman from Adrian’s past. He appears in Spring in December.

his entire existence in the comic is one of great controversy.